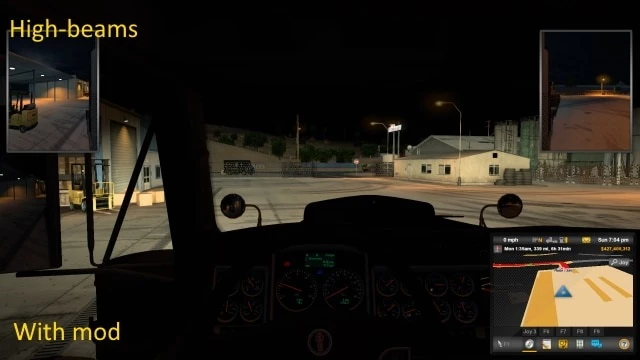 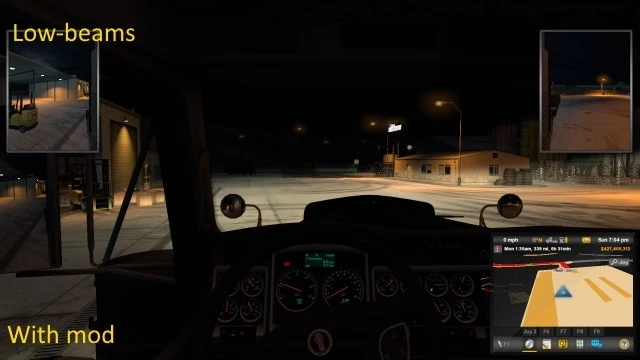 This is an SCS Peterbilt 389 that I have modified, I call it the Rezbilt 389.
I would like to also give credit to the modders that created the engine sounds that I am using in my truck.
All of the modded parts on this truck was created using blender. None of them was taken from any other trucks. Most of them were modeled from many of them in the game and from real life trucks.

Ready for 1.42 game update. NOW TRAILER CAN BE PURCHASED

This mod will change the vanilla companies to real brands, changes gas stations, shop textures and billboards to get a more real life experience. The gas stations are still WIP. We change the gasstations one by one and release them when one is finished. So please be patient, other brands will be changed and if possible the huge amount of Chevron and Texaco will be reduced, so more brands can make it to the game.
For the full list of changed companies and credits you can have a look at the change notes.
Read below for the load order in the mod manager and compatible mods.

Must be placed on top of the mod manager or at least above map mods and mods that change (traffic) textures or logos.

Does not work with:
* Any other real company mods (e.g. Grimes, P16, any revival mod)
* Any other texture changing mod. (e.g. Keeper’s, real corner shops).
* Any other billboard mod (e.g. real advertisement)

– Remember before disabling any mod, sell off all assets purchased while that mod was enabled. If you don’t, your profile will try to find things in vain, and it may become corrupt.
The GOOD NEWS is these stacked trailers integrate seamlessly with SCS’ Ownable Lowboys.
– Purchase stacked trailers from among the SCS Lowboys
– Purchase ONE specific trailer configuration (either ground-Coupled [SCS] or Stacked [EYT]). After ‘using’ it from Trailer Manager, Adjust Trailer (F7) to switch between Coupled and Stacked configurations. When you own one configuration, you automatically own its companions.
– A few customizations now survive through F7 ccle (I’m still working to make more survive). (Some customizations of the base game are disabled because they never survive F7 cycle.)
– Wheel/tire customizations still will NOT survive.
– Paint jobs survive.
– Bodies survive (Wood-Rail, Full Wood, Wood w/Alum)
– Some fenders and mudflaps survive (front & rear):
– (Front will not survive on configurations with JEEPS.)
– (Rear will not survive on configurations with SPREADERS.)
– Front bodies survive on configurations withOUT JEEPS.
– Bumpers with working reverse lights are available on configurations where they make sense. (e.g., trailers that use spreaders do not have reversing lights.)
– When you F7 from stacked to coupled, the coupled trailers automatically spawn with flags, strobes and a banner (‘OVERSIZE LOAD’ or ‘LONG LOAD’ – your choice).
– Cargoes that are long or oversized are labeled ( .. [LONG], .. [OS] ) to guide your trailer-configuration choice.
– Lowboy trailers have more descriptive names, and Trailer Manager is tweaked a bit to show those names.
– Stacked trailers accept all SCS base-game cargo, as well as Forest Machinery, Heavy, Volvo Const Eqp, and a few Oversize Cargoes IF you own the DLCs.
– Custom cargoes exist for ownable, freight-market, and traffic lowboys, and many SCS cargoes are branded (e.g., CAT, Doosan, Hitachi).
– Several custom cargoes exist among parked vehicles.
– Be aware cargo selection does not persist through F7 of trailer, so remember what cargo you’ve chosen if that’s important to you.
– Best times to adjust are . . .
1) Before dismissing, adjust to Stacked for damage-free spawning when you use it again.
2) Before triggering the job-choice icon at the cargo’s origin, adjust to Coupled. (After you trigger that icon, you can no longer adjust a trailer’s configuration. Cargo will load, but it will sure look funny!)

Now the bad news:
– The 3D modeler I use (ZModeler) isn’t compatible with SCS’ new lighting system, so all the flashy reflective tape on SCS’ trailers doesn’t exist on the stacked configurations. (NOTE: since I originally wrote this mod, I learned how to accommodate SCS’ new lighting system in ZModeler; however I’m loathe to redo all the models anytime soon if ever.)