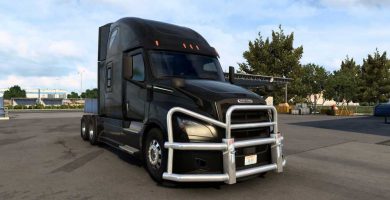 – Added International 9900i bumper and banner.

All bumpers/bull bars are chrome and paintable versions.
All bumpers have oversize load banners.

To change the color of the bumper, it is 6pixels x 6pixels in size and is located at the very bottom left corner of the texture.

Bars/bumpers have (a lot) light accessories. Lights are auxilery so turn them on by hitting F4 then aux lights.

All bumpers should now have oversize load banners that fit. 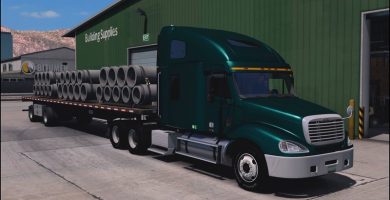 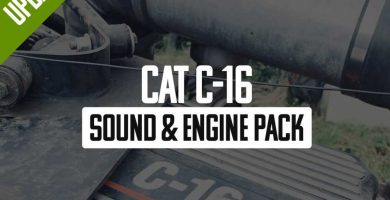 Proudly introducing the CAT C-16 Sound & Engine Pack. All sounds were professionally recorded from a Peterbilt 379 wrecker which has 8-inch straight pipes and an 800HP CAT C16 tuned engine running with a C18 cam!

Will work with all default trucks and popular modded trucks such as the Rollin 389, Jon-Ruda W900 etc (see full list).

This means that the volume of the engine, exhaust, turbo and intakes will fade more realistically over distance and each sound emitter is placed realistically.

This means that various effects are dynamically applied to the exhaust sound to simulate the engine taking a load. You’ll hear the exhaust note change as the throttle is pressed and will sound different depending on how heavy your truck is.

This means that there is a special acoustic effect applied to the exhaust, turbo and intake sound to replicate the environment in which the sound is being produced. This widens the audio and added realistic reverberation producing an incredibly immersive experience.

This means that each stage of jake brake available in this truck has its own unique sound. 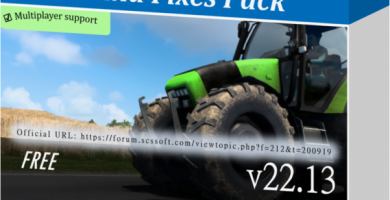 – Pack provides essential improvements to common sounds in the game for increased immersion.
– For over 6 years, this mod has proven to be a welcome addition for anyone wanting an immersive experience.
– The Steam Workshop version is highly recommended for quick and easy updates, maintained for the current game version.
– The mod is the most safe on the Steam Workshop, having procedures in place for adapting to major game updates.

* ETS2 1.43.3 + ATS 1.43.3. No errors in game log. Must have high priority in Mod Manager.
* Supported in single-player and multiplayer Convoy mode.
* Compatible with all maps and all trucks, including truck mods.
* Does not replace individual truck sounds, so this mod can be used with an unlimited amount of truck sound mods of your choice.

– The ultimate variety of suspension and tire bump sounds when driving over curbs or bumps in the road.
– Fuel / gas station sounds.
– Door close and seatbelt sounds after refueling.
– Train sound enhancements, including comprehensive sounds for all base game locomotives in American Truck Simulator.
– Real tire and road noise for all terrains: asphalt, gravel, grass, and sleeper lines.
– Nokia phone ringtone sound replacing the hurry up / late music, leading to less stress for the player.
– Default common sound reworks, such as improved default air brake sounds and a softer default reverse beep.
– AI traffic vehicle sound improvements, including sounds for Jazzycat’s Motorcycle Traffic Pack.
– English UK/US voice navigation variants with speaker effect added and no unrealistic phrases.
– Wind buffeting and rush of air sounds at high speeds only when the window is open.
– Location based sounds of environment.
– Sounds for animated objects such as F22 jet fighters and biplanes.
– Trailer coupling and trailer brace rotation sounds.
– Two standalone air horns.
– Softer mix for the Musical Road in American Truck Simulator’s Historic Route 66.
– Dynamic exterior and interior rain sounds, and an assortment of varying thunder sounds with delay.
– The default wiper sound may now squeak only when the windshield is dry.
– (Optional) Reefer / refrigerated trailer sound functionality that can be activated by trailer mods. 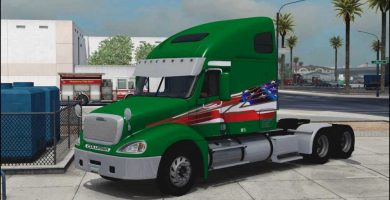 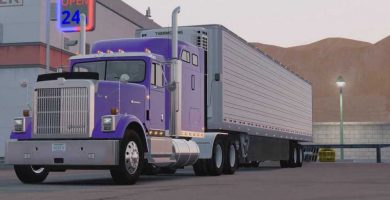 replaced a bunch of the truck’s parts with my own models. Including the hood, cab front, visors, mirrors, battery boxes.
The interior remains mostly the same as the 9900i, minus the adjustments
necessary for it to fit the new cab shape. Those would be new door
models, and new upper dash. I have not used any references for those, they’re improvised. 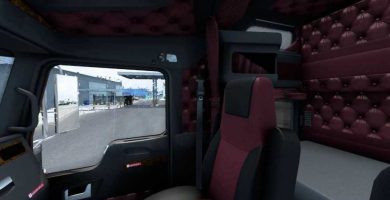 This mod adds various trim color options to the interiors for the default Kenworth W900L from SCS.
All presented variants are made according to Kenworth’s brochure. 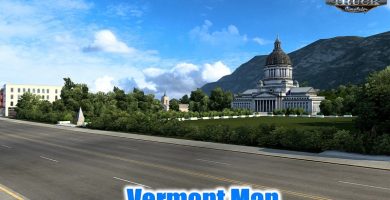 Vermont – is a small project from the author to improve Vermont in Coast 2 Coast map. Future updates will include more areas.

Changes in v3.0:
– Connections to NY and MA are added;
– 93 is extended to Manchester to link up with it’s southern counterpart;
– Burlington Intl will be a delivery location.