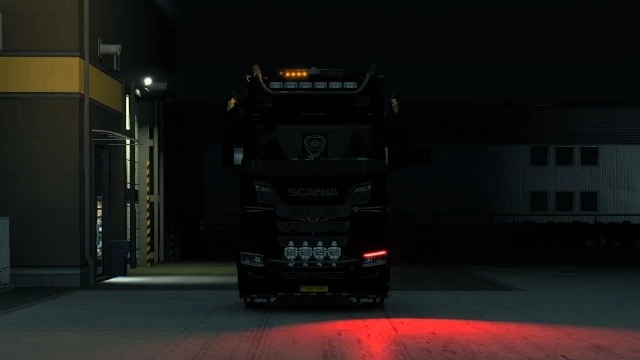 The KAMAZ-54901 truck tractor is today’s flagship of KAMAZ, designed for long-haul transportation.

Adapted to the extreme version of the game 1.40

This is the first swallow in a new line of premium trucks of the K5 generation. The car was presented in 2017, and the KAMAZ employees mastered serial production exactly by the 50th anniversary of the plant in 2019. The release of the new tractor was preceded by a lot of work – not only the production sites of the Chelny auto giant were updated, but also many processes at the enterprise. The most notable developments in this series were the launch of production of in-line 6-cylinder engines and the opening of a new cab frame plant in cooperation with Daimler AG.

* has two cabins (spoiler is added).

* two chassis (side skirts are added).

* own sounds and animation (sound taken from MERCEDES_ACTROS_MP4_1842_EVR).

* made animation of windows.

* painting the cab in custom colors.

* sounds from the author of IVR and added ITECO skin in green.

** Over time, the completely redesigned interior wakes up ..

Rusty dirty and dusty. For truck and trailer

Lots of dirty old tires for trucks and own trailers, standard rusty nuts, covers, 1 kind of axle hubs for the rear axle of the truck and trailer. And disks, on all axes.

And added icons with the “jerrymods” logo for a more convenient search of my details. Thank you for the attention.

If you get a donation, it would be great

This Map is a realistic replica of Lower Saxony in 1:3 format.

Sold at a mods dealer