Scenery is super important in every game but in Microsoft Flight Simulator, it is probably the thing that makes and breaks every playing experience. Scenery helps create and add layers of immersion to your gameplay which means that scenery can be fun, realistic, exciting or even spooky. Here, on Gamersmods, players of MSFS 2020 can find unique modifications for the scenery of the game.
Scenery mods are passive mods which means that they aren’t playable but rather sit in the background or are scattered around the map and create or improve the atmosphere by adding immersion. So, for example you have the famous Stonehenge mod which turns the world-famous structure into a 3D rendering because it is unfortunately flat in the base game. However, not all scenery mods strive for realism. You can have Godzilla stomping around NYC or see destroyers from Star Wars floating around above Sydney or New York.
So, as mentioned, some scenery updates are meant to fix bugs, glitches or issues that the developer has left while others add funny or fictitious details and scatter them all around the world. When you download the mod, place the files in the ‘Community’ folder and launch the game. All scenery mods are absolutely free on Gamersmods. 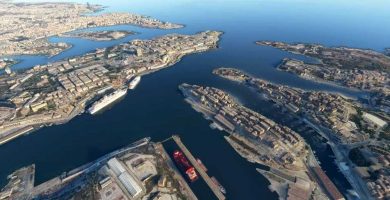 I have started working on the Maltese Islands to improve the basic scenery overall.

I am very new to the SDK and this is a work in progress.

Soon I will also start on a visual improvement on Luqa Airport also.

My free time is limited therefore updates may take some time.

For now as a start I have added

– a placeholder for ‘Fungus Rock’

Let me know in the comments if you have any feedback.

My next improvement planned is the Freeport area.

I will only be using SDK included models and no external ones or Gmaps photogrammetry imports, but will try my best to make it look authenthic.

The Andorra – La Seu d’Urgell airport is a small regional airport close to Andorra, in the vicinity of the Pirineos mountain range. Enjoy the beautiful landscape and some VFR in one of Europe’s most beautiful areas. Short and medium trips to Barcelona (LEBL), Sabadell (LELL), Bilbao (LEBB) or Madrid (LEMG) are great missions.

This is a fictional upgrade based on photos and other resources. No custom buildings (yet!), everything stock. No impact on FPS.

INSTALLATION Ready to drag and drop to your Community folder. 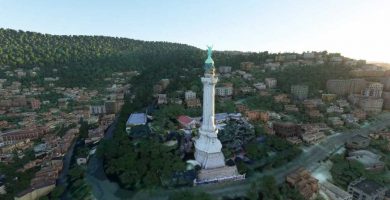 The Vittoria lighthouse and the Marian sanctuary of Monte Grisa are two very visible monuments flying over Trieste. The sanctuary is also visible while walking on the banks of Trieste, and in MSFS it was completely missing.For the lighthouse we thank anavriN for the free angel 3d model published on cgtrader.comAs for the sanctuary, thanks to polilla85p for the free 3d cross published on the same site. Both objects had escaped the resumption of google.maps. For the lights I thank MrMo for his EDHK Lights Pack.

To install it just bring the file in the Community folder, in the MSFS directory 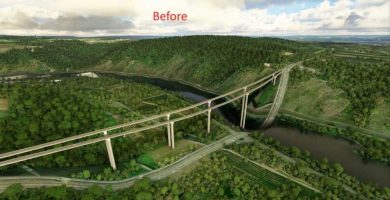 Directly behind the airfield Koblenz-Winningen (EDRK) there is a big dent in the Moselle. In addition, the Mosel valley bridge does not look very nice either. The Bing photo scenery unfortunately also includes an aerial view of the bridge. The radio tower opposite the aifield is an ugly round block.All this is corrected with this patch.
Handmade Moselle valley bridge (936m long and 136m high) and television tower (260m high)Terrain of the Moselle straightened.Hand retouched photo scenery

Just copy EDRK_patch into the community folder Have fun! 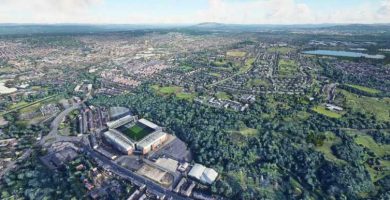 Blackburn in the UK 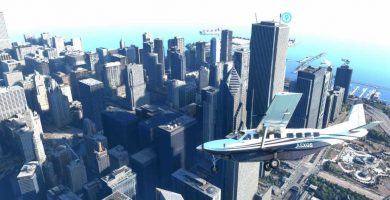 – Aon Center (fully detailed with roof features)
– Prudential Plaza (including the mast on One Prudential Plaza)
– An under-construction Vista Tower… aka St. Regis Chicago (I was not able to obtain a completed model of it at this time, but I can try in the future to add this)
– Wrigley Building and Tribune Tower
– Lakeshore East Development update
– Improved mods for Millennium Park
– Aqua Chicago
– Chicago’s Second Tallest Building along the riverfront


***Updated to include night lighting!!

Items I am aware that need improvement, and I hope to try in future versions:

– Ground Imagery of Maggie Daley Park
– I attempted to replace the imagery with updated data, but this caused the waterfront to be overridden and removed the “water effect”. – A few of the buildings appear very bright. I did import the data with the brightness reduced to try to match the models in the game. A few did not take despite several tries.
– A couple of buildings have “split models” but this only affected a few small ones and didn’t appear very noticeable.
– I will retry when I can obtain a completed Vista Tower model.

I welcome feedback on any of this project. The model was taken using the Google Maps imagery… Full credit and copyrights to the creators of those models, and this is purely meant as a project of love of Chicago with no profits to be gained from this. 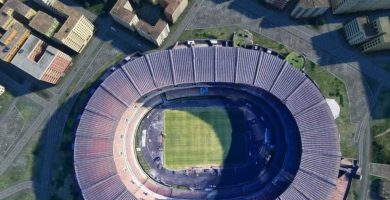 The Diego Armando Maradona Stadium (in Italian, Stadio Diego Armando Maradona), is a multipurpose stadium, but mainly dedicated to the practice of football, located in the Fuorigrotta neighborhood, in the city of Naples, capital of Campania in Italy. It is the main sports facility in the city, equipped with multipurpose gyms and martial arts, an athletics track and a basketball field. It serves as the regular headquarters of the SSC Napoli. It has a capacity of 55,000 spectators1, making it the fourth stadium in capacity in Italy, after the Giuseppe Meazza Stadium, the Olympic Stadium in Rome and the San Nicola Stadium. Following the death of Argentine soccer player Diego Armando Maradona, who was instrumental in helping SSC Napoli win Serie A in 1987 and 1990, the Mayor of Naples, Luigi De Magistris, proposed renaming the San Paolo stadium to Diego Armando Maradona in honor to the Argentine. 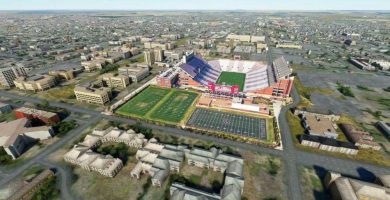 Gaylord Family Oklahoma Memorial Stadium Gaylord Family Oklahoma Memorial Stadium, also known as Owen Field or The Palace on the Prairie, is an American football stadium located within the campus of the University of Oklahoma in Norman, Oklahoma, United States, which serves as the home of the Oklahoma Sooners , has the capacity to hold 84,000 spectators.
BuildingCost $ 293,000 ($ 3.95 million in 2017)Start of works 1921Opening October 20, 1923 The stadium was recently renovated completing the last stand, but the graph is not yet in google maps, when it is updated this complement will also be updated