FS22 News.
Follow this page to get the latest & hottest news about the FS22 game as well as 3rd party development updates which are relevant to all Farming simulator 22 players out there. Here you’ll find all relevant updates and news about the game from the developers. We will publish it as soon as something comes out and new information becomes available. We want to offer you more insight into the world of Farming simulator 22.
If you are an active player of farming simulator, you should check out the farming simulator mods that we have here. There are literally hundreds if not thousands of unique modifications that you can download completely free from our site. Check out the FS22 mods categories to find out more! 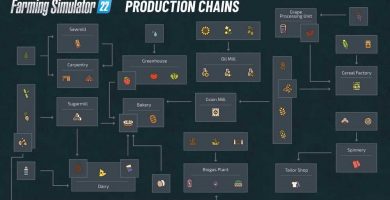 As more and more farmers look for additional ways to generate income, Farming Simulator 22 will offer you various opportunities to grow your farming operations. Don’t stop at selling your fresh harvest: If you want more of the capitalism-flavored cake (made with regional ingredients only), and earn even more from your produce, start a production chain!

In Farming Simulator 22, there is a total number of 13 different production plants you can not only supply with your goods, but buy, own and place on your land, too. Take a look at the graphic to learn more about the dependencies.

So, whatever is produced in the end, it’s made locally: Whether it’s cheese at the dairy, flour at the grain mill, or even clothes at the tailor shop after wool has been processed at the spinnery.

One of our favorites is the bakery, offering local residents fine bread and delicious strawberry cake. It’s as lucrative as it is tasty, and requires a whole set of ingredients: flour, sugar, eggs, butter, and strawberries from your greenhouses – we’ll tell you more about those and more, soon. You can bee excited! 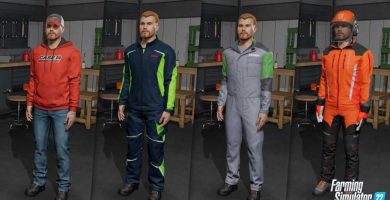 In Farming Simulator 22, you’ll have the chance to farm with more people than ever, thanks to cross-platform multiplayer. Find out more in our crossplay announcement! Of course, you’ll want to customize your character in the game. You can – with our new character editor. Let’s take a look at the possibilities to create your own farmer in Farming Simulator 22!

We added a lot of new character features and items. Choose your hairstyle, including a beard or mustache, between various clothing items from top to bottom, and even authentic full-body outfits from your favorite brands. Here’s the complete list of options: 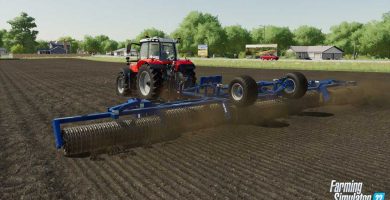 We did some groundwork in Farming Simulator 22: Not only does the soil, like other surfaces, appear more natural and vivid thanks to Parallax Occlusion Mapping, there are also new ground working systems and a lot of new ground textures you can look forward to.

Mulching. The revelation of domestic gardening through questionable overuse of bark chips. But, backyards and home improvement are not what we’re talking about here. Although, the science is basically the same: Mulching improves the soil (and therefore the yield).

In Farming Simulator 22, we use a mulcher attached to our tractor, to cut and apply fresh grass to the surface of the soil when cultivating a grape or olive orchard, for example. After harvesting your crops, you can also mulch the stubble left on the field to improve the yield.

And, because it’s still important to many, you also mulch to guarantee the visual appeal of your grape and olive orchards, as mulching makes everything on your vineyard look nice and clean, too. How wonderful!

Also, there are bigger types of mulchers in the forestry section. They even mulch bushes and tree stumps. (Almost) Nothing will get in the way of mulching, if you apply the correct machinery.

Leaving the wonderful world of mulching, there’s a hard reality lying dormant in the ground: Stones! When cultivating, or plowing, stones can turn up on your field. Depending on what kind of cultivator you are using, the size of the stones varies. Using a subsoiler, you will dig up some larger rocks compared to your shallower groundwork. Your soil lies in chaos now. Oh, no! But, what now?

When collecting stones with your stone picker, you can even make some additional money by selling them to the debris crusher. Get your revenge on those soil invaders (and even get paid for it)! Before you begin to sow your crops now, you should take care of the stones one way, or another. You can also turn stones off, if you like.

Leaving them on the field will damage your machines. Not only that, your problem will get worse – more and bigger stones will turn up. If you don’t like to collect them, there’s another method to get rid of them – at least the smaller ones. Here comes another ground working mechanic into play, that ties into stones. Yes, stones are the gift that keeps on giving…

If you picked large rocks out of the ground, you need to collect them. With smaller stones, turning up after cultivating or plowing, you can also use this spectacular looking agricultural tool called a roller, and simply press them into the ground again. Yes, just roll over them – they had it coming, threatening the well-being of your expensive machines.

Rollers are not just a tool to conceal the rocky consequences of cultivating or plowing, though. After sowing your crops, you gain an additional yield bonus when rolling over, flattening and compressing the seedbed. Considering the type of crop and field size, we’re talking about a considerable amount of money.

There’s also incentive to get your roll on, when you’re a grassland enthusiast. As rolling around on your meadows grants you a fertilizing stage. Mind, that rolling over grass sets it back to the first growth stage – so you should roll over the grass when it’s freshly cut and mowed.

Look at the new ground textures!

We revised basically all ground textures for Farming Simulator 22. You’ll notice more visual diversity. And, when playing with some friends invited to your farm (even via Crossplay), you’ll definitely notice, if those slackers haven’t rolled the seedbed, as the texture looks different from the one where it’s not. Don’t let them get away with lowering your yield!

Above, you see just some examples of the new ground textures in the game. Click on the image to enlarge. 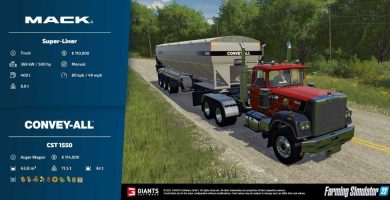 Fact Sheet Fridays are back! We know, all of you machine enthusiasts want more details on the machinery in Farming Simulator 22. And you’ll get them every Friday until release of the game on November 22nd.

We’ll post them on our social media channels, and collect them right here in this article to provide you with an overview in case you missed them on Discord, Facebook, Twitter, or Instagram. Subscribe to our channels and don’t miss the announcements of new brands and machines for Farming Simulator 22. 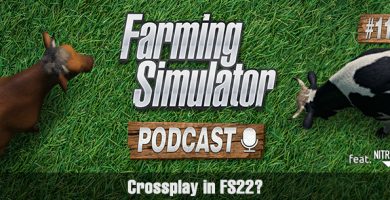 Crossplay is coming to Farming Simulator 22! Missed our crossplay announcement? Go, catch up! There’s an FAQ included. Also, if you’d like to know more about what that means for your future multiplayer experience, listen to the new episode of our podcast!

As a special guest, we welcome Marcel Bößendörfer to the podcast, CEO of Nitrado – the world’s leading provider of dedicated game servers, including servers for the Farming Simulator series. Find out more about Nitrado below!

The official Farming Simulator Podcast is also on Spotify, Apple Musicand many other platforms. Check it out and subscribe, so you don’t miss a single episode!

Nitrado is the world’s leading game server hoster, offering high-quality game servers at a low price for a variety of games, including Farming Simulator 19, and soon Farming Simulator 22. Nitrado servers allow you to host a persistent multiplayer session for you and your friends to drop in and out anytime, and have full control. Even via App, allowing you to manage your Farming Simulator server anywhere and as easily as possible.

Using the latest technologies, Nitrado strives to provide its customers with the best possible gaming experience. That includes safe servers, secured by DDoS protection, and a 24/7 customer support. Just in time for the new era of crossplay, Nitrado is once again our trusted partner for Farming Simulator 22 servers.

“Crossplay is fantastic news, and finally allows console players to enjoy dedicated servers, too. Gamers waited a long time for this. We’re very glad and proud to be involved right at launch to support this new way to experience the game”, comments Marcel Bößendörfer, CEO at Nitrado. Find out more about Nitrado servers over at Nitrado.net!

Around every two weeks, we’ll discuss themes and topics relevant to our fans. Community Manager Lars aka “Lisertan”, and Community Coordinators Chris aka “Chaki” & Kermit aka “Kerminator” talk about the most important news from Farming Simulator and GIANTS Software.

That’s not all, of course! We’ll have guests on, too! Don’t think of the podcast as a simple news source. Think about the podcast as a way to get deeper into the latest topics and hear more about them right from the source. 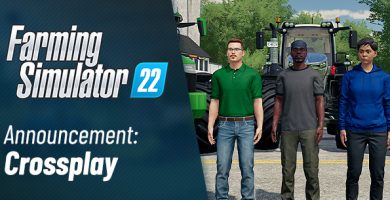 Multiplayer: Play Farming Simulator 22 with all of your friends!

Good news, everyone! Farming Simulator 22 will feature cross-platform multiplayer. No more separation between friends on different systems – everyone can play together, regardless of their preferred platform.

So, get your controller-wielding buddies online and show’em how precise you can harvest those new grapes with mouse and keyboard (or the other way around)!

Crossplay FAQ: What you should know

Which platforms are supported?

Crossplay is supported by Farming Simulator 22 on PC, Mac, PlayStation 5, Xbox Series X|S, PlayStation 4, Xbox One and Stadia. Everyone can play together!

How many people can play together?

When playing on a dedicated server hosted by Nitrado, other server providers, or even self-hosted dedicated servers, up to 16 players are possible, regardless of the players’ systems.

Yes. Console players can rent and host their own servers via Nitrado, and other server providers, too. Just like PC players.

Can I deactivate crossplay?

If you’re worried, other players might be superior at farming because of mouse and keyboard controls: don’t worry, they won’t be. But, you can still use filters to avoid crossplay servers, and prevent players on other platforms from joining your server.

On PlayStation and Xbox consoles, you can disable it in the system user preferences. Make sure to allow crossplay for the console user to make this feature available in-game.

Only the host is saving the progress. Farm progression is not saved for everyone else.

How will DLCs & mods affect crossplay?

If a server has already more slots occupied than supported by your platform, joining the server won’t be possible. Since old-gen and current-gen consoles differ in terms of available slots, too, console players have to keep in mind the slot count when playing with friends using a console from a different hardware generation.

Thanks to crossplay, cooperative farming will be more fun than ever. Work the fields together, occupy different farms, and help each other out where you can. With production chains becoming part of Farming Simulator 22, there’s even more to do, now.

In other news: the latest fashion

That’s not all: So everyone can farm together in (their own) style, the new character creator also allows for various new customization options. Just in time for crossplay. Stay tuned, we’ll show it to you very soon. Get ready to put on shiny rubber boots, some cool glasses, and glorious mustaches. 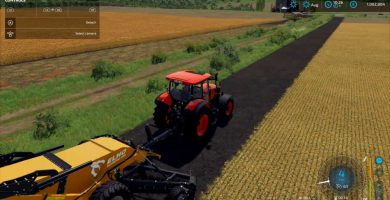 Did you miss our gamescom stream to show you more about Farming Simulator 22! Watch the whole presentation, now! QA Lead Ken Burgess and Community Manager Lars Malcharek show you new gameplay scenes from the game. 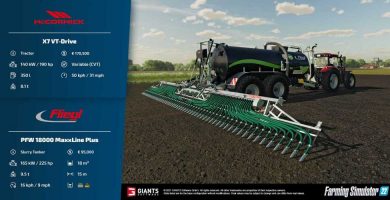 About the machines & tools in Farming Simulator 22

Fact Sheet Fridays are back! We know, all of you machine enthusiasts want more details on the machinery in Farming Simulator 22. And you’ll get them every Friday until release of the game on November 22nd.